Sep 3, 2014 CLASS 9, English Literature, question answer
Question 1: Describe in your own words the poet’s feelings when he sees the host of golden?

Answer 1: The poet was thrilled to see a host of golden daffodils by the side of the lake under the trees moving their head in a joyful dance . They seemed to be dancing like a human being expressing their energy and joy. When the poet saw the flowers, his imagination traveled to another world to find a comparison. He was reminded of the stars twinkling in the milky way at night . The long line of the daffodils flowers bore comparison with the bright stars seen across the night sky

Question 2: Why does the poet say I gazed and gazed but a little thought / what wealth that show to me had brought?

Answer 2: the poet was alone full stop he was moving about aimlessly over the high valleys and hills watching the beautiful scenes of nature full stop suddenly he saw a great number of golden coloured flowers by the side of the lake under the trees moving their heads in joyful dance . Waves in the lake by the side of the flowers were also dancing but the daffodils flowers had outdone the waves in their expression of joy . A poet is found to be happy in such a joyful company of the dancing flowers and the waves. In sheer delight and surprise he could not decide what neath of joy this si sight has brought for him. He could perhaps gazed the pleasure of the present moment but he could not imagine how again and again in future he would recall and re-live this experience.

Reference to The Context 1 :

1:” I wandered lonely vales and hills. “ 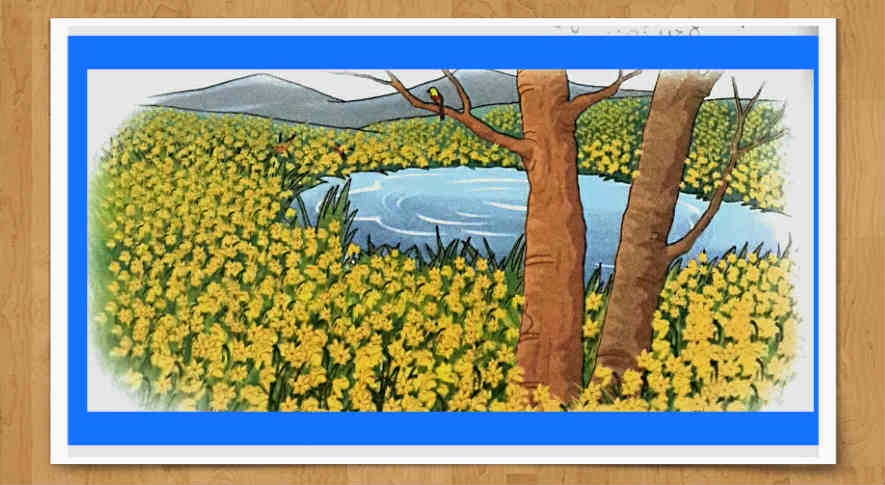 Reference to The Context 2 :

Reference to The Context 3 :

Answer a: The poet William Woodsworth wanders like a lonely cloud over the valleys and hills.

Answer b: While wandering among the valleys and hills the poet comes across the host of the golden daffodils flowers.

Answer c: The daffodils flowers were by the side of the lake under the trees. They were fluttering under in the breeze as if they were dancing like humans bein expressing their joy and energy.

Answer a: The host of golden daffodils by the side of the lake under the tree has been compared to the stars. A milky way is a cluster of stars which sign brightly across a huge stretch of space. similarly like the stars in a milky way the poet feels that the daffodils are not only uncountable but also they are dancing with full energy and joy in never-ending lines along the margin of the lake.

READ :  'The Bet 'Reference to the Context English Literature Class 9 and 10

Answer b: The daffodils outdid the wares in the lake. The daffodils seem to be dancing like human being expressing their joy and energy when the breeze blew over them. Both the flowers and waves seem to have a competition to show their feelings and expressions.

Answer a: The wealth which is referred to here by the poet means a wealth of joy and happiness; which actually comes from happy and fond memories when the poet saw a host of golden daffodils by the side of the lake beneath the trees.

Answer b: Whenever the poet lived on his couch in an unoccupied and sad mood the fond and happy memory of the daffodil flowers flushed upon his eye of imagination which is a source of joy and inspiration to the poet in such his lonely mood.

Answer c: By the term bliss of solitude ” The poet wants to mean that he felt really happy in the joyful company of the daffodil flowers and the waves. Both the flowers and waves bear in a joyful mood. But they seemed to compete with each other in such a mood. The poet caught the joyful mood and thus become a part of nature itself. He only kept on watching the scene, unable to decide what wealth of joy, he had received from it. The greatest benefit of this experience was that whenever the poet lied on his couch in an unoccupied and sad mood, the fond and the sweet memory of the daffodils crushed upon his eye of imagination; which a source of joy and inspiration to the poet in his lonely and pensive mood.

READ :  The Tiger In The Tunnel Question and Answer for Class 10 ICSE

write a comparative essay about the two poems. “Ang bayan ko” and “Dearest pearl of the orient seas”.

The wizard of oz | The Yellow Brick Road | English Literature