Newton’s third law : ‘To every action there is an equal and opposite reaction.’
This law can be realised while dropping a ball, hammering a nail , holding a hose pipe of high pressurised water pump , during bicycling etc. 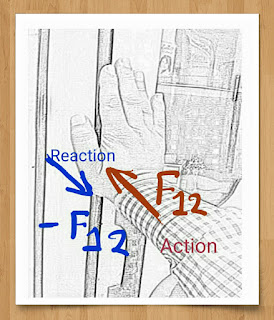 Now we will explain the three case as shown int the video. You can also watch the video.

Case 1 [Hose Pipe]: When a man holds a hose pipe of high speed water rushing out from the pipe. The stream of water jet put an action on the hand of the man. Due to this action the man’s hand pushes backward. Due a contact between pipe and the man’s hand a reaction is produced that helps in holding the pipe. 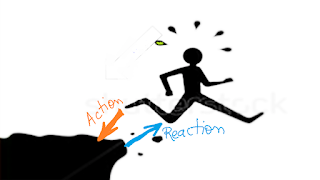 Case 3 [A man jumping from a Boat]:     When a man jumps out from a boat , the boat get pushed back. It is because the the man put an action while jumping out of the boat. The boat in return produce a reaction on the man. As the boat is not fixed this force causes boat to go back. In this proces the man get support while jumping due to the reaction force. 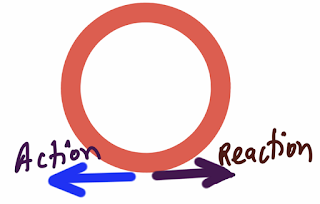 Case 2 [Bicycling]:     While bicycling , the wheel of the bicycle exerts a pressure on the ground . This is an action against the ground. At the same time the ground also react with reverse force. This is called reaction. Due to this the man get support while bicycling.