May 7, 2017
My Lost Dollar :
By referring closely to the incidents in the story My Lost Dollar’ express your opinion on the practice of lending and borrowing money.

My lost dollar is a short comedy story on the practice of lending and borrowing Money. The full story revolves around $1; which was being lend to Major Todd by the narrator. Major Todd was the close friend of the narrator and he was the member of University club of Montreal. 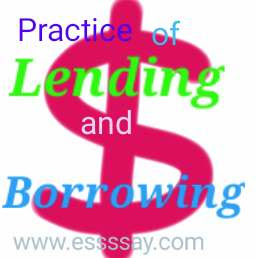 Being a forgetful type of person mother Todd forgets about the dollar. Actually one year ago Major Todd was about to leave for his Bermuda trip and he had no change money to pay the taxi fare, Therefore he quietly ask for $1 from narrator. The narrator lend him the money, hoping that Todd would return the money.

During the trip Major Todd from Bermuda send a note for narrator. The Nrator expected that his Dollar would be inside it but to his disappointment there was a simple note containing the information about the extreme temperature of Bermuda. After his return within three weeks, narrator went to receive him at the station and asked him to take a cab but the later refuses the proposal. The narrator thought that taking a taxi and paying taxi fair might remind Todd of his dollar. During the conversation also the narrator made several refference of currency used in Bermuda to remind Todd of the loan. But it had no effect on Todd. After several meeting at the club everyday with Todd, it seemed to narrator that his friend seemed to have forgotten about the dollar.

READ :  God Lives in the Panch Comment that a fair Judgement Weighs more over Friendship

Therefore after several attempts he disappointedly added his friend’s name in his list of borrowers. It is about a very practical case of borrowing and lending of money. In this case, the lender always remembers about his lent money but the thought diminishes when it comes to borrowers.It is because that whenever the narrator meets with his friend Todd he is always preoccupied with the thought of his dollar. Finally at last, he says that he might have forgotten to repay the money borrowed by him from others. Therefore his dollar has not been returned to him.