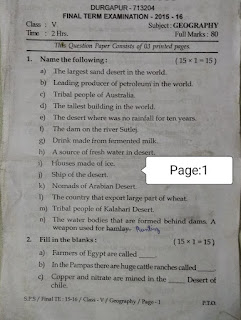 a) The largest sand desert in the world.

b) Leading producer of petroleum in the world.

d)The tallest building in the world.

e) The desert where was no rainfall for ten years.

f)The dam on the river Sutlej

g) Drink made from fermented milk .

h) A source of fresh water in desert.

i) Houses made of ice.

l) The country that export large part of wheat.

n) The water bodies that are formed behind dams.

o) A weapon used for hunting. 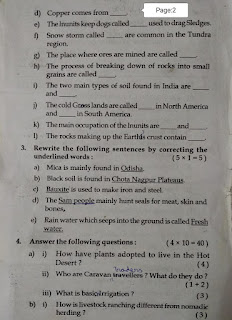 3.Rewrite the following sentences by correcting the underlined words. (5 x 1= 5)

a)Mica is mainly found in odisha

b) Black soil is found in Chota Nagpur Plateaus

c) Bauxite is used to make iron and steel.

e) Rain water which seeps into the ground is called Fresh water .

b) i) How is livestock ranching different from nomadic herding?(3)
ii)Who are Khoi Khoi ? What is their main food ?(1+2)
iii) Why are very few trees found in the cold grad land ?(2)
iv) How did the life of the American Indians change after the European settlers came to North America.(2) 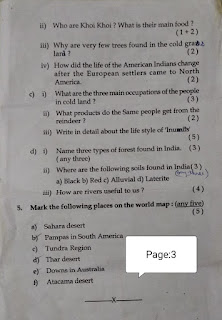 c) i) What are the three main occupations of the people in cold land ?(3)
ii) What products do the Same people get from the merica reindeer ?(2)
iii) Write in detail about the life style of Inumits . (5)

5. Mark the following places on the world map:(any five)(5)

This Question Paper can be used for practicing your preparation.